Cloquet, MN – Unicorn Riot was live from a rally in below freezing temperatures against Enbridge’s Line 3 pipe yards in northern Minnesota on Monday, December 11, which local indigenous-led resistance is claiming are illegal.

Watch our live coverage of the event below:

Most or all of the pipe has already been purchased by Enbridge from the dead Sandpiper pipeline project, and is presently being stored in multiple pipe yards spread out over 1854 and 1855 treaty areas. The Line 3 project, which would cut through dozens of wild rice growing areas used by indigenous Anishinaabe people, has not yet had completed any environmental review of the project, leading opponents of the pipeline to protest that Enbridge is storing its pipe without valid permits. Those in opposition to the proposed Enbridge project assert that three sets of state laws have been violated: the 2013 Construction Stormwater General Permit; the Minnesota Environmental Policy Act (MEPA), which mandates the completion of environmental reviews; and Minnesota Administrative Rules 4410.0200 and 4410.3100.

Without a completed environmental review, any Construction Stormwater Permits issued to Enbridge by the Minnesota Pollution Control Agency (MPCA) would be invalid, per the MEPA. Additionally, MPCA attorney Jean Coleman is quoted as saying “It is both the law, and agency [MPCA] practice, that permits are not issued for projects or activities prior to the completion of environmental review” in a pamphlet issued by Makwa Initiative water protectors pamphlet.

During the event on Monday, over a hundred people marched from Enbridge’s Line 3 pipe yard to Enbridge’s Sandpiper pipe yard. “It [Line 3] wants to cross through the headwaters of the Missisippi River to the shore of the shore of Lake Superior, that’s a fifth of the worlds fresh water.” – Tara Hrouska

Listen to Tara speak more in the video below:

The rally-turned-march lasted for three hours in wind chills that peaked at 0 degrees. After the crowd reached Enbridge’s Sandpiper pipe yard, Tara spoke about how the pipes for the never permitted Sandpiper were now being sold for a different pipeline in a different place.

To support our continued coverage of this and other events, please consider making a sustaining monthly donation to our all-volunteer-operated not-for-profit media collective: 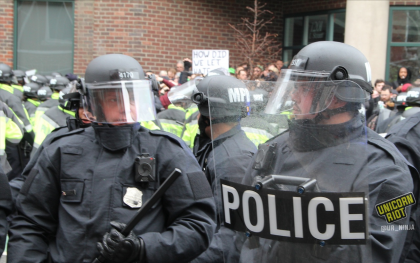 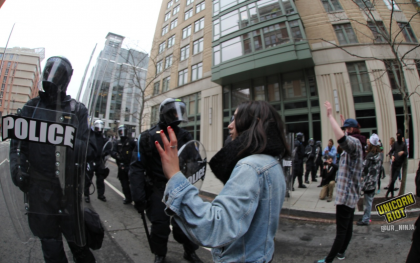