UPDATE – 4/5/17: Wednesday afternoon, the jury announced that they had found all three co-defendants guilty of violating the Unauthorized Camping Ordinance. Denverite reports:

Jerry Burton, Randy Russell and Terese Howard were each charged with violating Denver’s ban on urban camping and interference with a police officer. Prosecutors said they took far too long to comply with orders to move. Burton and Russell were found not guilty of one count of interference but guilty of a second count that occurred later that day. All three were sentenced with one year of unsupervised probation; the only requirement to satisfy it is court-approved community service.

‘Our jury was just following the law,’ defense attorney Jason Flores-Williams said after the verdict was read. ‘Unfortunately, it was an unjust law. Justice died just a little bit today.’ ” On April 3, 2013, Denver Homeless Out Loud (DHOL) published a comprehensive report (PDF) from the information they collected from surveys of over 500 Denver residents living without housing. The surveys essentially asked how the newly implemented camping ban, which went into effect on May 28, 2012, affected their ability to survive.

Denver’s Unauthorized Camping Ordinance makes it a crime for any person to shelter him or herself from the elements while residing on any public or private property, without appropriate permission. Under this law, it is illegal for homeless people to sleep, sit for extended periods, or store their personal belongings anywhere in Denver, if they use any form of protection other than their clothing (e.g., a blanket or a piece of cardboard to sit upon). Violations of the camping ban can bring up to a $999 fine and a year in jail penalty.”

According to DHOL, 24 people have received tickets since the ban’s implementation.

On the morning of Monday, November 28, 2016, Burton and Russell were cited for “illegal camping.” Their survival gear including tents and sleeping bags were confiscated as evidence.

Here is our footage from that morning:

On the evening of November 28, Burton and Russell were, for the second time that day, cited in violation of the camping ban. Howard was cited her first ticket of the day that evening.

A Facebook Live video taken by Kayvan Soorena Tyler Khalatbari-Limaki, which has close to 600,000 views, shows police officers taking blankets off of Burton as he sits on the ground.

Burton suffers from Degenerative Bone Disease, and in freezing temperatures like that evening, he says his body locks up in agonizing ways, which makes it hard for him to move. He ended up being driven by a friend to the Veterans Affairs Hospital where he spent the night. Burton is an honorably discharged military veteran.

Here is our live stream footage from Tuesday morning’s press conference outside the Lindsey-Flanigan Courthouse:

Attorney for the case, Jason Flores-Williams, describes this prosecution, saying,

When you think that not one senior executive from Wall Street was prosecuted for the financial crisis, but here we are prosecuting three poor people for just trying to survive – tells you all you need to know about justice in America.”

Flores-Williams is the same attorney suing the city of Denver on behalf of DHOL and the thousands of residents without housing in Denver whose rights have been repeatedly violated. The class-action lawsuit was filed on Thursday, August 25th, 2016.

Unicorn Riot will continue coverage of this trial, of the class-action lawsuit against Denver, of the Homeless Bill of Rights in CO Legislature, and other issues affecting Denver’s unhoused population. 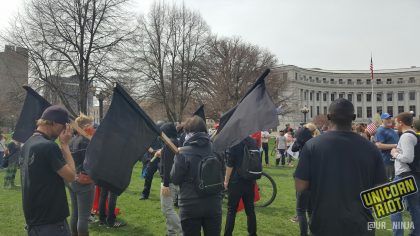