MINNESOTA – Unicorn Riot has uncovered documents revealing the creation of a task force stockpiling equipment and training police in preparation for Line 3 pipeline protests across the state. The documents show coordination between various law enforcement agencies from states across the region including Minnesota, Nebraska, North Dakota and South Dakota.

Documents published below for the first time show that state officials have created an incident command structure to rapidly deploy ‘Mobile Response Teams’ (or ‘MRTs’) across each Minnesota State Patrol (MSP) district in Minnesota to quickly confront any protest against the pipeline. The “Northern Lights Task Force” was created in 2018 ” to coordinate planning, resources and response to the Enbridge Pipeline 3 replacement project.”

As protests against the Dakota Access Pipeline (DAPL) ended in 2017, North Dakota Sheriffs and Highway Patrol officials began giving seminars advising agencies around the country on how to prepare for pipeline protests. North Dakota police leaders are now presenting themselves as trusted protest experts, based on their experience deploying Mobile Field Force teams to repress pipeline resisters at Standing Rock. Tactics used by North Dakota officials against the #NoDAPL movement included spraying water on protesters in below-freezing weather, making indiscriminate mass arrests, targeting journalists, and the aggressive use of “less lethal” munitions known to cause serious injury.

Documents show that on July 3, 2018, MSP Lt. Paul VanVoorhis sent an email to the North Dakota Highway Patrol asking to be put in contact with their “Trooper” that presented about DAPL policing at the 2017 International Association of Chiefs of Police (IACP) Conference in Philadelphia. Law enforcement associations such as the IACP,  National Sheriffs’ Association, and the Police Executive Research Forum (PERF) have played key roles in crushing protests against the Dakota Access Pipeline, Occupy Wall Street, and other recent social movements.

According to the emails, a call was then scheduled for July 9, 2018 to allow North Dakota Highway Patrol Major Tom Iverson to speak “about the ND protest (Standing Rock), and general planning and lessons learned” at the Mobile Response Team (MRT) planning meeting in St. Cloud. According to documents, the goal of the meeting was “to connect a myriad of Mobile Response Team items, including initial pipeline response strategies.”

On July 11, 2018, MSP Officer Jeremy Geiger emailed Cass County North Dakota Sheriff Paul Laney, Highway Patrol Captain Niewind, and Fargo Police Chief David Todd to schedule a face-to-face meeting to discuss “some lessons learned, best practices” and “field force tactics” from “experts who have been there and done that.” According to the documents, that meeting took place in early September  2018. 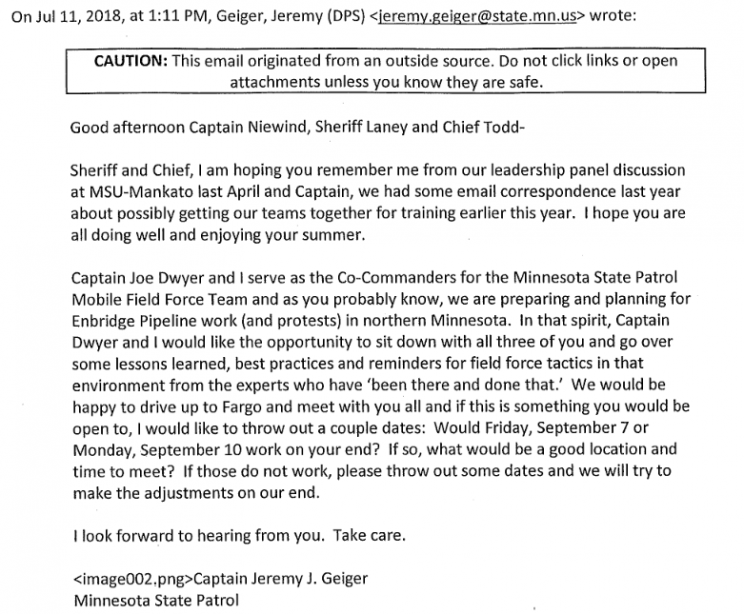 On July 31, 2018, Minnesota State Patrol Mobile Field Force Co-Commander Jeremy Geiger emailed Cass County Sheriff Paul Laney and Brian Niewind of the North Dakota Highway Patrol to ask if the South Dakota Highway Patrol could also attend a planning meeting scheduled in September. The officer states in the email that South Dakota law enforcement “are preparing for pipeline construction (and all that goes along with that) in 2019 across 9 counties.”

On September 10, 2018, the Northern Lights Task Force was created in Bemidji, Minnesota during a meeting at the St. Louis County Emergency Operations Center (EOC). The meeting to create the new task force “included representatives from law enforcement, jails, 9-1-1 communication centers, intelligence, emergency managers, and legal representatives.” The task force includes “all 14 counties in MN and reservations along the pipeline route.”

“The overall direction from Sheriff Turner was they wanted to see one central command post and then regional or area command posts and EOC’s.” – Dewey Johnson, Emergency Management Coordinator

The “Northern Tier Districts” are made up of Minnesota State Patrol district 2700, 2800, 2900, 3100, 3200, and 2200.  Officers from each of those districts make up the “North District Field Force” of the MSP Field Force Team. Mobile Response Teams (MRT) are deployed to disperse crowds using Mobile Field Force (MFF) tactics. (Officers deployed with an MRT are generally referred to as ‘riot police’ outside of law enforcement jargon.)

Each riot squad is equipped with batons and shields, “aerial support,” and protective equipment. “Each member has a turtle suit, helmet, batons, gas masks.” Every MRT/MFF team also includes “a member of the Chemical Agent Response Team that provides less-lethal support along with lethal cover.”

Line 3 is a controversial tar sands pipeline project proposed by Canadian oil giant Enbridge, and has been the target of years of protests by indigenous tribes and environmental activists.

In summer 2018, just months before the Northern Lights Task Force was formed, some agencies had already begun holding “table top” exercises at Camp Ripley, a military base also used by the Minnesota National Guard. This exercise was also attended by then-Governor Mark Dayton who “declined to comment” on the meeting, according to the StarTribune.

In July 2018, the South Central Minnesota Tactical Team and “deputies from many counties” began receiving MRT instructor training on “field force operations.” Around this time, Captain Jeremy Geiger sent an email discussing consolidation of the Rapid Response Team (RRT) and Mobile Field Force (MFF). In recent years, high profile deployments of MFF units were seen during 2014 protests in Ferguson, the 2009 G20 Summit in Pittsburgh, and the 2008 Republican National Convention in St. Paul, Minnesota.

The following September, beginning late in the month and lasting through early October 2018, 180 Game Wardens from the Minnesota Department of Natural Resources (DNR) received Mobile Field Force training at Camp Ripley to prepare to confront indigenous and environmental activists intent on stopping construction of Line 3. Training received by Game Wardens included “live fire” and “less lethal” exercises, including the use of chemical weapons. According to the Minnesota Department of Public Safety, the DNR can provide assistance to law enforcement operations through use of specialized equipment such as watercraft, ATVs and snowmobiles.

Another training at Camp Ripley was scheduled for early November to train new members. Around the same time, the Minnesota State Patrol MRT was scheduled to travel to FEMA’s Center for Domestic Preparedness (CDP) in Alabama for more Mobile Field Force training. Even more MFF trainings occurred in late November for Districts 2700 and 2900; according to documents these also included the use of chemical weapons. The remaining districts are likely to have held their trainings sometime in December or later.

One page within the documents describes a Special Operations “SRF CUT Team Training” on December 5, 2018, which took place at the Hennepin County Sheriffs Office (HCSO). The training consisted of a “brief review of Enbridge (Line 3) protest activity”, an “equipment inventory”, and a segment on “protest device extrication.” ‘Cut Teams’ are called into action by police command when protestors lock themselves together or to a structure, and are trained to use circular saws, hammers, and chisels to extricate individuals from lock boxes, such as “sleeping dragons.”

According to slides included in the documents, Chemical Agent Response Teams (CART) are a “high liability area” because they provide “lethal cover”, as well as deploy chemical weapons against civilians, while “everybody is watching”.

The Northern Lights Task Force is also “compiling information for each of the six pipeline regions in northern Minnesota” to improve response time by the Mobile Field Force. A map included with documents shows the task force plans to “identify resources and potential flashpoints” along the new pipeline route.

In August 2018, police were already monitoring a rally in Bemidji, Minnesota, called “Line 3 Resistance Training.” In the email, police are requesting a meeting at the Law Enforcement Command (LEC) Emergency Operations Center (EOC) to discuss “preparation and response.”

In another email, Major Dana Svendsen from the South Dakota Highway Patrol wrote Sgt. Dickenson of the Minnesota State Patrol and asked to speak “with someone about issues related to protester activity with the Enbridge pipeline.”

The emails from Minnesota law enforcement also illustrate how private actors are seeking to assist in government surveillance of pipeline protesters. One message, addressed to an officer with the Criminal Information Sharing & Analysis (CISA) unit, sports the subject line “Private Sector Partnership Meeting.” In this email, Cody Larson, a Security Intelligence Analyst working for the Mall of America, volunteered to supply background information about Line 3 pipeline protests. Larson even went so far as to offer to share files they had gathered in 2016 while working as the “Lead Tactical Analyst for the North Dakota State and Local Intelligence Center (NDSLIC/Fusion Center) during the Dakota Access Pipeline Protests.” He then went on to clarify they had worked in both North Dakota’s Tactical Operations Center (TOC) and Special Emergency Operation Center (SEOC).

As the conversation between police officials progressed, a meeting was arranged between “Line 3 Security Lead” Michael Harrington and Co-Commander Joseph Dwyer of the Minnesota State Patrol. According to the documents we received, this meeting possibly took place on Monday, October 22, 2018.

On November 19, 2018, an email shared within the a St. Paul Special Investigations Unit shows officers monitoring a “Stop Line 3” protest outside the Minnesota Public Utilities Commission.

Emails previously released to the public by Unicorn Riot in October 2018 show the Minnesota Bureau of Criminal Apprehension (BCA) Fusion Center was monitoring social media for “Line 3 Protest” activity as far back as June 2018.

A fair amount of the emails discussed the logistics of operating the task force. Topics ranged from storage of equipment, trailers and vehicles to overcoming specific obstacles such as communication and response times.

In one email, MSP officers discuss acquiring more “less lethal” munition to use during protests. Yet another email discusses ordering more “(redacted)” to have “a bit more of a stockpile on hand leading up to the suspected protests.” Another specifically mentions the “need for lethal cover” during operations. The documents also mention using a Long Range Acoustic Device (LRAD) for issuing dispersal orders.

[Above Image: “Supervisor Role During Deployment”]

These documents show that law enforcement agencies are actively working to refine their incident management systems. For example, a slide included within the documents mentions maintaining communication via software called Everbridge, which is available both as a mobile app and a web interface. Everbridge allows for instant reporting and communication of incidents over wireless 4G/Wifi, to which the incident command can then direct MRTs to respond.

As law enforcement continues preparing for potential Line 3 protests, some resources are being put into contingency planning for the task force. One email from the DNR to Minnesota State Patrol, with “crowd control” as the subject line, discussed the “potential for pipeline protests in the Itasca State Park area” located near the proposed Line 3 construction route and just minutes away from Two Inlets, a proposed Line 3 pump station site.

According to the documents, preparation by law enforcement will continue well into 2019. The DNR is scheduled to train in Mobile Field Force tactics, again, sometime in February. Meanwhile, training of “specialty teams” such as the MSP Crisis Assessment Response Team (CART) and Cut Team is scheduled for “Spring 2019/Summer 2019” at the CDP in Alabama. Cut Teams will train in “Field Force Operations, Field Force Extrication, and Field Force Command.”

During anti-pipeline protests in Standing Rock, Mobile Field Force units were deployed under an “Emergency Management Assistance Compact” (EMAC), a national state-to-state mutual aid mechanism which allows for sharing personnel and/or equipment between state agencies if an emergency is declared by a state Governor.

There has yet to be an emergency declared by the Minnesota Governor which would allow for mutual aid assistance from regional police departments to be deployed to that state, as was seen in North Dakota during NoDAPL protests. However, Minnesota law enforcement was deployed in Standing Rock under EMAC, and it is plausible that if an emergency is declared over Line 3 protests in Minnesota, North Dakota law enforcement could be called in under the same mutual assistance compact.

The documents show that the Northern Lights Task Force intends to continue holding planning meetings and trainings throughout 2019 in anticipation of Line 3 protests. As spring draws closer, Minnesota law enforcement agencies, as well as others across the region, are actively preparing a militarized response against future protests using the same controversial playbook North Dakota used at Standing Rock. 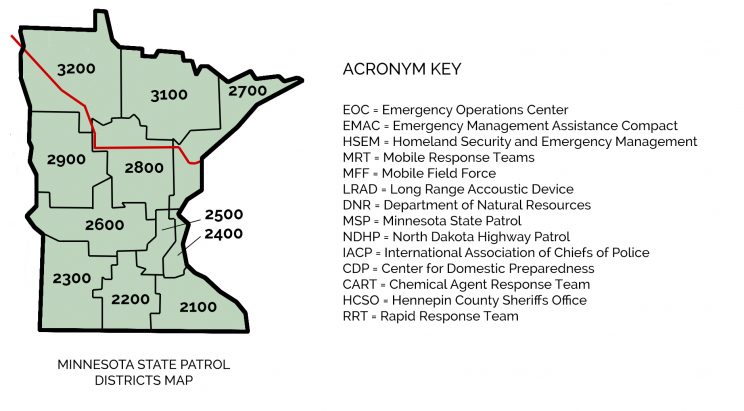 Data requests and research by Andrew Neef and Chris Schiano.