Minneapolis, MN – Around 7 a.m. on Thursday, March 18, police attempted an eviction of the Near North houseless encampment. Scuffles erupted between Minneapolis Police and people defending the camp which led to numerous injuries and five arrests. This incident came after the city’s Department of Community Planning and Economic Development (CPED) posted eviction signs at the camp on Monday morning ordering people to leave by Thursday.

Many people answered the call for eviction defense after the notices were posted to prevent the displacement of nearly two dozen mostly Black and Indigenous people who call the houseless encampment of Near North their residence. The camp has survived for over five months and is a beacon of mutual aid and collective living.

MPD claims there is “little video” and that community members “attacked” them. They’re LYING. pic.twitter.com/UKcX9FpEmA

The defenders met the police on an adjacent street as the police attempted to block off an intersection with tape to allow for the clearing of the camp. Snow balls were tossed at the street near the police who reacted by pepper spraying, tackling, and punching camp defenders.

The arrests were particularly brutal. Video showed the police macing a person, then pulling them up by the hair and macing them again. Another person was beaten by multiple officers, punched in the side numerous times and had their face ground into the street while their body was contorted off the sidewalk and an officer’s knee was on his neck.

“The arrests were extremely brutal. It didn’t feel like an eviction attempt, felt like aggression/harassment, they didn’t bring any bulldozers or school buses or anything.”

In a press conference about George Floyd Square later in the day, Police Chief Arradondo was questioned about the violence that occurred. He stated he was “appalled by the actions” of the eviction defenders that “attacked” his officers. Five people were arrested, two of them charged with fourth-degree assault on a police officer. Yet, the defenders say they were the ones who were violently attacked.

The defenders say they were there to support the unhoused and prevent their belongings from being thrown away and their shelters destroyed.

This marks the third eviction attempt by the city which wants the camp cleared out due to “health and safety” concerns. They say that the encampment is unsafe because an unspecified petroleum company and a chemical company previously occupied the land where the encampment is located.

We previously spoke with Near North camp resident, Brenda, about the everyday struggles people face at camps.

Camp residents have acknowledged these health and safety concerns but also point out that they would not be there had they not been evicted from other encampments like ‘Sanctuary Hotel’ or Powderhorn Park.

This also begs the question of why the city would allow this area to be settled if they knew that it was contaminated. The land in question had been abandoned and neglected by the city for years before it was presented as a landing space for houseless people displaced by law enforcement raids.

It was only after the tents started to appear that city officials and employees of commercial real estate company Wellington Management visited the camp on October 23, 2020, to pass out materials about the site’s historical use. Wellington Management, Inc. claims to “own and manage a $400 million portfolio of more than 100 properties” throughout the Twin Cities area making it one the largest real estate companies in the Twin Cities.

According to the Hennepin County interactive GIS system the parcel at 205 Girard Ave N. is owned by the city’s Community Planning & Economic Development Department, while Wellington-related entities own the areas with the trailers to the south and southeast of the parcel.

After the attempted raid, a coalition of health care workers and others in the public sector published a petition seeking signatures calling for Mayor Frey to end evicting houseless encampments.

“As health care workers, public health workers, providers, students, and researchers, we are calling Mayor Frey and the members of the City Council to account for the choices they have made that allowed this traumatizing action targeting the Near North community to occur on their watch.”

Residents and supporters created the following video to bring more context to what’s happening at Near North.

A protest took space and blocked streets in Uptown Minneapolis the next day.

Protesters are blocking an intersection in Uptown Minneapolis as part of a demonstration responding to police brutality during an attempted eviction of a homeless encampment yesterday morninghttps://t.co/Rd4Ls5PqtP

Cover image is screenshot of Minneapolis Police kneeling on a person’s neck while they hang off the curb with their face into the concrete – image taken from video posted by @mnurising. 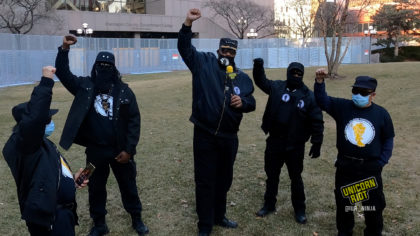 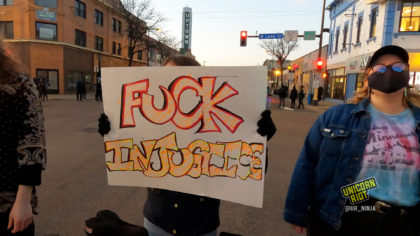