Minneapolis, MN – The largest encampment of unhoused people in Minneapolis was evicted on Wednesday, Jan. 18, following a recent shooting which left 27-year-old Adnan Mohamed Ali dead. The Samatar Crossing Encampment in the Cedar-Riverside neighborhood (also playfully known as ‘House of Balls Encampment,’ named after a business located across the street) had represented a sense of stability for about 100 residents, many of whom have very few resources.

Residents were given a “24 Hour” notice on Tuesday afternoon, Jan. 17, that they must be vacated by 9 a.m. the following morning. Many people were told verbally by Hennepin County outreach workers that they would transport tents, furniture, and other belongings to an offsite storage facility, but no such help ever came. Instead, residents were offered 20 Gallon ziplock bags by members of the State Department of Transportation (MnDOT), whose jurisdiction the land is under.

Adding to the confusion, residents weren’t given a clear answer, when asking where they could go as an alternative. Many were quick to point out that shelter beds are notoriously unavailable, and when they do open up, many times it’s just a mat on the floor which you have to be in no later than 9 p.m., and leave by as early as 6 a.m. This can lead to issues for the many residents who have regular employment, and couples who get separated once inside shelters – oftentimes without phones to locate one another.

During the eviction, the scene became hostile as community encampment defenders faced off with contractors who were tasked with clearing out the camp.

One person was forcibly arrested by multiple Minnesota State Patrol troopers while demanding they cancel the scheduled displacement. The person arrested, who wished to remain anonymous, told Unicorn Riot in a written statement that they were shocked and horrified to see what they felt was “inhumane” treatment by the authorities who left unhoused people “huddled under a bridge with no shelter, hungry, and cold.”

“I found the sheer quantity of people who needed those tents (I would guess over a hundred) and the intensive amount of State Patrol (I would guess at least 50) totally shocking and absolutely making a very bad problem worse. To hear about those same people huddled under a bridge with no shelter, hungry, and cold… is shocking … Horrifyingly inhumane and I’ll never forget seeing this.”

During the eviction, housing activist, DJ, recorded workers from Big Top Contracting threatening to “beat [them] like a slave.”

Big Top Contracting, Inc. is owned by Alfonzo Williams, the CFO of the Agape Movement, a group centered around George Floyd Square who became known for helping the city to move barricades at the Square on June 3, 2021. Agape has been partnered with the city and paid by the Minneapolis Office of Violence Prevention for community “engagement.” Some local activists have called them a counter-insurgency force or collaborators, while others have welcomed them.

Meanwhile, Big Top continues to play ‘clean-up crew’ for MnDOT. During an attempted eviction of an encampment off I-35W last summer, Williams was recorded initiating an aggressive sequence of events by ordering his crew of workers to start uprooting tents, some of which were housing people at the time.

Aside from threatening community members during last week’s eviction, the young group of ten Big Top contractors were tasked with destroying tents and collecting biohazardous materials at times.

The eviction fell one day before yet another major storm swept through the Twin Cities, marking a pattern of displacements during major weather events. Many of the residents have expressed that encampments bring a sense of community and safety in numbers. As opposed to trying to survive individually, they pool resources and many camps have their own rules to minimize disturbances, as a show of good faith as neighbors. Now forced into the street with none of their belongings, people reported having nowhere to go.

This eviction comes just 19 days after the eviction of the longstanding Quarry encampment.

About the author: Aaron Johnson is a street journalist and filmmaker currently filming ‘They Sleep Among Us’ – a documentary about Minneapolis unhoused encampments. Follow on Instagram: theysleepamongus. 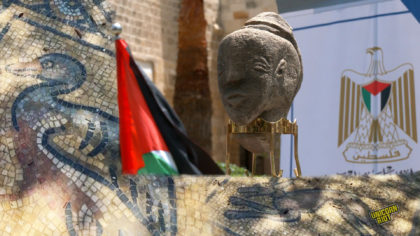