Minneapolis, MN – Minneapolis Police evicted nearly 100 residents from the empty lot turned encampment off 29th Street and 14th Avenue on July 20, 2022. Some residents were woken up by police pointing guns at them while yelling that they’re “trespassed” and they must leave without their property. A majority of people’s belongings was bulldozed, thrown into large garbage trucks, and trashed.

Unicorn Riot was on the scene shortly after the eviction started on Wednesday afternoon and spoke with several residents who are now displaced from the tent city that provided them safety and community.

Dozens of police cars, two SWAT units, bike police, workers from the Minneapolis Department of Public Works, traffic police, and other authorities took part in the eviction. For a couple hours, some of the displaced residents took up shade just south of the encampment outside of the police tape.

The residents spoke with skepticism about the large scale fire that occurred a few houses down from the encampment about 11 hours before the eviction. Three houses and a garage were caught aflame, two of them vacant, with one fully collapsing before dawn on the hot and windy morning.

“Last night’s incident with the whole fire thing, I feel like that’s a whole set up, yo.”

The cause of the fire is under investigation.

Collapsed home in middle is where fire started. Home on left vacant. Home on right occupied but people inside got out safely. pic.twitter.com/wuJaIwg8WR

After having most of their belongings trashed, all of the residents, who were largely young adults of Black American, Indigenous, and Mexican ancestry, have now moved on after the eviction with many taking space in another empty lot and building community again. Watch Unicorn Riot live stream of the aftermath of the eviction.

Two people were arrested during the eviction. Both charged with fleeing and obstruction of the legal process. See our past reporting on the 29th and 14th encampment below. 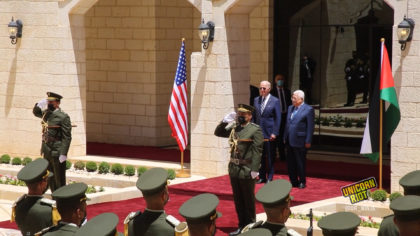 Palestinians Speak Out During Biden’s Visit 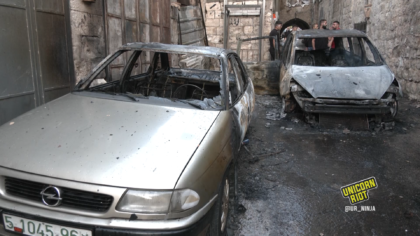 Israeli Raid on Nablus Kills Two Palestinians and Wounds Many