Minneapolis, MN – Another encampment of unhoused people living in tents is threatened by the City of Minneapolis for eviction. For almost two months now, an empty lot on 29th Street and 14th Avenue in South Minneapolis has had a growing number of people residing on the grounds. On June 27, notices were posted on the grounds of the encampment ordering people to vacate. In response, activists are organizing eviction defense for the encampment.

After spawning from evictions at other encampments, Unicorn Riot visited the 29th St. and 14th Ave. encampment in early June 2022. We heard from King, a resident of the encampment, who spoke about the cycle of evictions and seeking a place for refuge.

“We came from North Loop. We’ve had many camps since Powderhorn [Evicted in August 2020]. They keep coming, bulldozing us, plowing our stuff.”

King spoke about being evicted from a handful of encampments. He said he was in the North Loop encampment where embattled and politically-connected land owner Hamoudi Sabri had invited people to his land and promised they wouldn’t be evicted, as well as others including Bloomington Avenue and 26th St., the Speedway up the street from there, 14th Ave. and 24th St., and on 30th Ave. near Lake Street. Each one of those communities formed out of the need of safety were evicted by the authorities.

As inflation and prices for necessities continue to increase, so does the need for housing and shelter. With thousands of people unhoused every night in Minneapolis and not enough shelters, many seek safety in tent communities, or encampments. These communities have grown in the recent years and since the coronavirus pandemic and the George Floyd Uprising, a network of mutual aid has helped support the encampments with resources.

The main threat to these encampments is the police, who regularly carry out the evictions of the encampments, while city workers or contractors clear any of the tents and belongings in the area. Countless evictions have occurred through Minneapolis in recent years, leaving only a few encampments standing for longer than a couple months: the Quarry and Near North, which has had several successful eviction defenses.

The encampment at 29th and 14th has now fallen into the eviction cycle. Starting with complaints and then to corporate media reports followed by eviction threats and aggressive actions by authorities trashing personal belongings. The residents at 29th and 14th are hoping the latter doesn’t happen. A news report published last week interviewed disgruntled homeowners on 14th Avenue while not quoting any encampment residents, painting the encampment as crime-filled and drug ridden. Less than a week later, the city posted No Trespassing signs.

No trespassing notice was posted today on the empty lot at 29th St/14th Ave, where residents who’ve been swept several times in recent months have sought a modicum of safety together.

We need Phillips residents to organize against the landlords and bureaucrats pushing sweeps. pic.twitter.com/lkkf0CcPYG

In early June, eviction defenders thwarted an attempted encampment eviction near the exit ramp of 28th Street off Interstate 35. No tents were taken despite very aggressive actions by the owner of the contracting company sent to clean up the encampment eviction, Big Top Contracting’s Alfonzo Williams. Williams is also the CFO of The Agape Movement who are contracted by the City of Minneapolis as “violence interrupters.”

The last big eviction carried out by Minneapolis Police was in April, when a massive operation was executed to clear the 5th Avenue and Lake St. encampment.

Update: After weeks of threats, on July 20 the encampment was bulldozed by the city. The following is a video from encampment defense on July 8 and our coverage of the eviction. 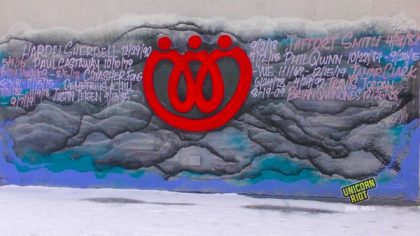 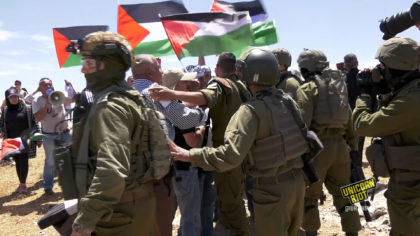