Minneapolis, MN – Community members are gathering in response to early morning actions by authorities to eradicate the space around George Floyd Square, considered by some an ‘autonomous zone’.

Working in coordination with a community group called Agape which is a contractor with the city of Minneapolis, the city began to phase in their shutdown of the sacred space at George Floyd Square and moved the concrete barriers that had been placed to stop traffic. The streets have not been re-opened, and community members have come out to defend, protect and announced solidarity with the square.

The contract between the Agape organization and the City of Minneapolis was a $25,000 contract, at $40/hour, per documents obtained by journalist JD Duggan.

A press release from CAIR-MN today covered some of the community reaction (excerpt):

“I was traumatized by the reopening of the street at George Floyd Square. I just cried because it was traumatizing to see what has happened. No one told me or the community. But one thing I will not do even though they opened the street: I will never drive my car down the street where my nephew was killed, knowing that he had cried out for his mama,” said Angela Harrelson, Aunt of George Floyd and Co-chair of the board of the George Floyd Global Memorial.

George Floyd Square has become a local, national, and international place for healing, memorialization of the life of George Floyd and many others who have been killed by police, and a place of resistance against oppression, racism, and white supremacy. There is literally no other place like it in the world.

“For the last 12 months, I have served as one of many volunteer caretakers of George Floyd Square. All I could do was weep when I saw how the city worked to tear down the one sacred space we have to memorialize those who have been killed by police. There are no words for the pain I feel. The fight for justice continues, said Jeanelle Austin, South Minneapolis resident and volunteer.

Jaylani Hussein executive of CAIR-MN said, “George Floyd square should be respected and the demands by the community for police accountability has yet to be met. The case for the remaining officers is pending and GFS is and will always be a national memorial for victims of police violence.”

Last August, activists and community members presented a list of 24 demands to city leaders in order to address the short and long term concerns of community members, including the lack of economic opportunity in the community surrounding George Floyd Square (See Justice Resolution here). The city has not met those demands or responded in good faith to community concerns.

Later in the evening protesters gathered near Lake St and Girard Ave. S. in Uptown Minneapolis, near where law enforcement killed someone reportedly named Winston Smith earlier in the day. Law enforcement initially claimed he was a murder suspect and the U.S. Marshals Service walked that back later in the day, saying the victim was suspected of firearms violations.

Unicorn Riot talked with protesters in the area.

Take a look at our mini-doc, “Beyond the Barricades: A Look At George Floyd Square“: 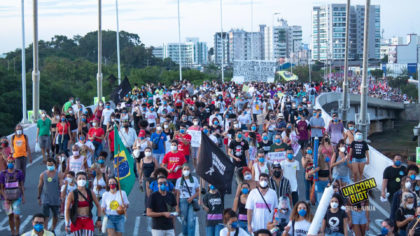 Brazil: The People, at Last, Took to the Streets 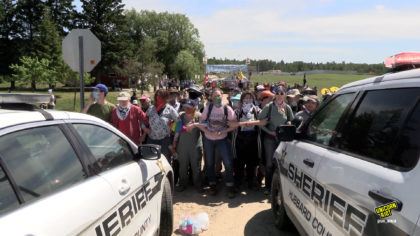