Minneapolis, MN – “I can’t breathe” were some of the last words of the latest victim to police terror. Memorial Day in Minneapolis saw the echoing of the same words as Eric Garner before he was killed by police six years earlier. For over eight minutes Minneapolis Police Officer Derek Chauvin kneeled on the neck of an unarmed and handcuffed man on Monday night, killing him.

This is at least the second person Chauvin has killed behind the badge. The incident was recorded by a bystander and posted to Facebook.

Unicorn Riot has been covering the street protest that rallied the afternoon of May 26. Tune in:

The FBI has been called in to assist the Minnesota Bureau of Criminal Apprehension (MN-BCA) in the investigation of the incident.

Neither the victim, who’s said to be in his 40s, nor the multiple police responsible have been officially identified. However, after reviewing the video, seeing the officer’s name tag and cross-checking it with what a bystander said was the officer’s badge number, 1087, the officer is found to be Derek Chauvin. The victim is said to be George Floyd, from Houston, TX.

Officer Derek Chauvin, who’s been on the force for nearly two decades, has at least 10 complaints that have been filed against him. He has shot and killed at least one person and shot and wounded at least one other, in that person’s own bathroom.

During the encounter that was filmed by community member Darnella Frazier, Chauvin is seen pushing his knee into the handcuffed man’s neck as he was on the pavement of Chicago Avenue near 38th Street in front of Cup Foods. On the video, bystanders can be heard questioning why Chauvin continued to dig his knee in the man’s neck for so long.

At one point Chauvin reached for his mace to threaten the bystanders while continuing to kneel on the man. Chauvin’s partner, Tou Thao, can be heard repeatedly telling people “don’t do drugs” in response to concerns Chauvin was physically injuring the man.

The police said the man was a suspect in an alleged forgery attempt and that he resisted arrest.

In a midnight presser in front of Minneapolis Police Headquarters, Public Information Officer Jon Elder said that officers at the scene called in an ambulance when they “realized that the suspect was suffering a medical distress.” PIO Elder seems to have disregarded the video showing the man being kneeled on by his distresser.

An update from the department’s PIO: pic.twitter.com/DZDLHp99Wd

Elder also stated the officers had body cameras on and activated, but the bystander video clearly shows Chauvin without a body camera.

The President of Communities United Against Police Brutality (CUAPB), Michelle Gross, said this video makes it “clear this was an outright murder“.

“The MPD has an appalling record of killing people of color and covering it up.  This time, though, witnesses and video will make it a lot harder.

It’s clear this was an outright murder.

We demand an independent investigation—not the usual BCA cover up—and we demand these cops be prosecuted for murder.” — Michelle Gross, CUAPB

“He should not have died“, said an emotional Jacob Frey, the Mayor of Minneapolis, during a morning press conference with Minneapolis Police Chief Arradondo. Frey said “he was a human being and his life mattered.” Frey condemned Chauvin’s actions, saying he was “wrong at every level” and that Chauvin “failed in the most human sense.”

Mayor Frey and Chief Arradondo said the racial aspect of the incident is why the FBI was called in, to investigate civil rights violations.

A protest is planned for 5 p.m. tonight at 38th St. and Chicago Ave. in South Minneapolis. Follow Unicorn Riot for more updates. 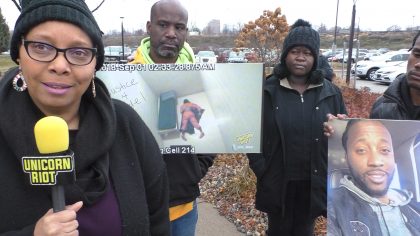 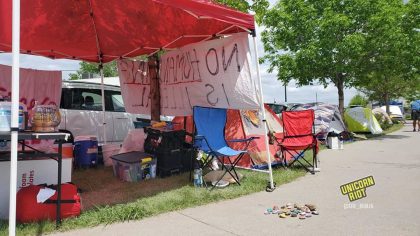 Encampment to ‘Free Them All’ Outside GEO ICE Detention Center