Responding to motions and orders filed in the run-up to trial, Judge Cahill published several rulings, upholding eight of the nine charges against the four former police officers involved in George Floyd’s death. It’s yet to be decided whether the trial scheduled for March 8, 2021, will be held in Hennepin County.

The now-dismissed third-degree charge had been issued by Hennepin County Attorney Mike Freeman on May 29, four days after Chauvin kneeled on George Floyd’s neck for nearly 10 minutes, ending his life.

Although footage of Floyd’s death was virally circulating around the world, Freeman initially balked at charging the officers, claiming there wasn’t enough evidence. Intense protests seeking accountability for Chauvin’s actions escalated to the besiegement of the Minneapolis Police 3rd Precinct on May 28. The next day, Freeman issued charges of second-degree manslaughter as well as third-degree murder.

County Attorney Freeman has faced criticism of how he deals with police involved killings for years. Community members in Minneapolis this year have been campaigning to ‘Recall Freeman‘ from office.

Though Freeman did eventually bring charges against Chauvin, the Legal Rights Center and the ACLU contacted Governor Tim Walz pleading for a more independent investigation. On May 31, Minnesota Attorney General Keith Ellison joined the case, technically invited on by Freeman.

Freeman was taken off the case during the September 11 pretrial hearing along with the other Hennepin County attorneys, over disputed interview procedures. Without Freeman and the county attorneys, high-profile lawyer Neal Katyal and Assistant Attorney General Matt Frank are the state’s prosecutors alongside Ellison.

Immediately after the third-degree murder charge was dropped on Thursday, Walz once again activated the National Guard, marking at least the third time since late May that military forces have been activated to potentially patrol Twin Cities streets on “state active duty“.

Two weeks ago, Derek Chauvin was released on a $1M non-cash bail from Oak Park Heights maximum security prison. Chauvin had sold his Minnesota residence while incarcerated and was quickly granted ability to leave the state by the district court due to perceived safety concerns. Judge Cahill specified that Chauvin must establish residence in a “contiguous state” to Minnesota.

On October 7, the same night Chauvin was bailed out, youth in the Twin Cities organized a rally of hundreds of people that started at George Floyd square and marched through South Minneapolis streets. A later action at the 5th Precinct was kettled by police who made over 50 arrests.

Chauvin is represented by Eric Nelson and his trial will be held with the other three co-defendant ex-officers involved (attorney in parentheses): Thomas Lane (Earl Grey), Alexander Kueng (Tom Plunkett), and Tou Thao (Robert Paule). 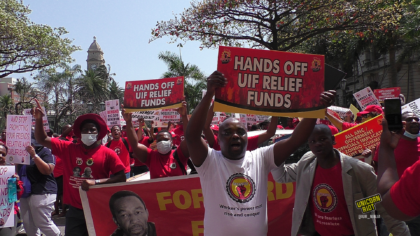 Unrest in Philly After Cops Shoot and Kill 27-Year-Old